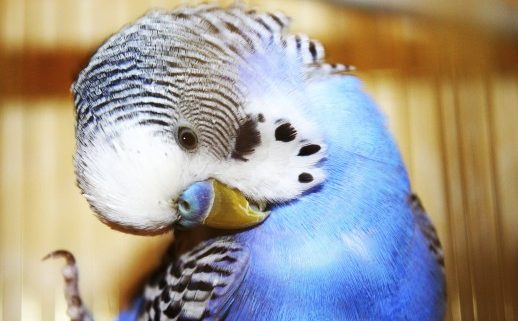 In my novel Daemon Seer, Lu is twenty-five years old before she finally has a pet, her parakeet Foster. When the daemons descend on Lu, Foster can sense them coming.  Lu realizes how much Foster means to her when she finds her front door open and Foster gone. In fact, the daemon Black Claw has stolen the parakeet and Lu must get him back. I wrote the essay below as a tribute to my parakeet Benji. It first appeared on my personal blog, Dreambeast. Although Benji died quite a few years ago, he remains dear to my heart.

Benji and I met at a party given by the fiancée of Joe’s department chairman. I knew only a few people there and soon retreated to a chair beside a bird cage. A parakeet came over, jumped onto the bars and hung by his claws, showing his wide blue belly and snowy vent. He was bigger than average. Later I found out he was half English budgerigar, a larger breed than the American parakeets usually found in pet stores. I moved my face closer and said, “Hey, little guy, you’re a cutie.” I whistled and clicked my tongue. He chirped enthusiastically.

I spent more time with Benji than with any of the party guests. At the end of the evening the hostess offered to give him to me, cage and all. Her soon-to-be husband disliked birds and joked that she might come home one day and find him hanged in his cage, with a little sign around his neck reading Goodbye, Cruel World. Though we’d just met, Benji’s owner trusted me to give him a good home. I did my best to deserve her trust for the nine years he was with me. 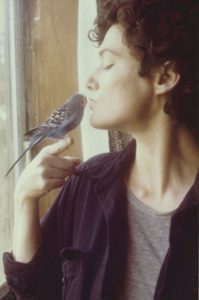 His vocabulary included such staples as “Benji is a pretty bird” and “Hey baby, you’re cute.” He might have learned more if I’d had the patience to teach him. But I would have loved him whether he talked or not. Gentle and affectionate, he liked perching on my shoulder and nibbling my ear as I read or watched TV. He soon began joining me at meals where — to Joe’s disgust — he perched on the rim of my plate and nibbled my food. He especially liked spaghetti in tomato sauce.

Benji was a less than athletic bird. When I set him on a parakeet swing, he hunkered down and gripped the bar like an acrophobic old gent trapped on a rollercoaster. He struggled to fly, working his wings frantically to keep his chubby body aloft and occasionally bumping into a wall and fluttering to the floor. He never got up enough momentum to hurt himself in these collisions, but I couldn’t help being scared every time he went down. Joe dubbed him Blue Thunder.

Near the end of his life, Benji became too weak to fly. But he would flutter to the floor and walk through the house until he found me, and I would pick him up and hold him, and pretty soon he would fall asleep.

He never forgot his first owner. He chirped with excitement when she and her husband came for dinner. After we finished dessert, I brought Benji to the table and gushed about how much I loved having him around. He chattered and preened, basking in the attention. His first owner’s husband remarked grudgingly that he was kind of cute. Benji flew from my hand and landed on the head of the man who’d threatened to hang him. Squatting and wiggling his tail, he squeezed out a tiny drop of bird dung. Then, having vented his feelings, he flew to his cage on thunderous wings. Call it coincidence if you want. I call it payback time.