Our war will not unfold in your imaginary heaven. We will fight on Earth with human beings as pawns and weapons.

Lu Darlington is a seer, bound to the daemon Talion through ritual and blood. It’s not a role she enjoys, but she has little choice: daemons take what they want and destroy whoever stands in their way.

So Lu’s surprised when Talion doesn’t punish her for her newfound ability to keep him from possessing her whenever he likes. In fact he’s pleased. The stronger she is, he explains, the more powerful he becomes.

And he needs that power, because a war is brewing in the daemon world, a war that will be fought by—and through—humans.

Lu’s friend Lisa Duncan can’t see daemons but she’s seen what they can do and so has stayed far away from Lu for years. But after a bizarre attack on Lisa leaves a man dead and she learns it’s only the first skirmish in the daemon war, Lisa realizes the safest place to be is with Lu.

Then Talion sends Lu away to teach her skills to another seer and Lisa must stay behind to look after Lu’s son Solly, conceived through a daemon ceremony with Talion. At four years old Solly’s seer abilities are already so strong Lisa is sometimes more afraid of Solly than for him.

As Talion’s enemies grow bolder, Lisa and Lu face attacks from every direction. There seems little hope any of them will survive—until Talion and his allies devise a plan.

The only problem is how much it will cost. 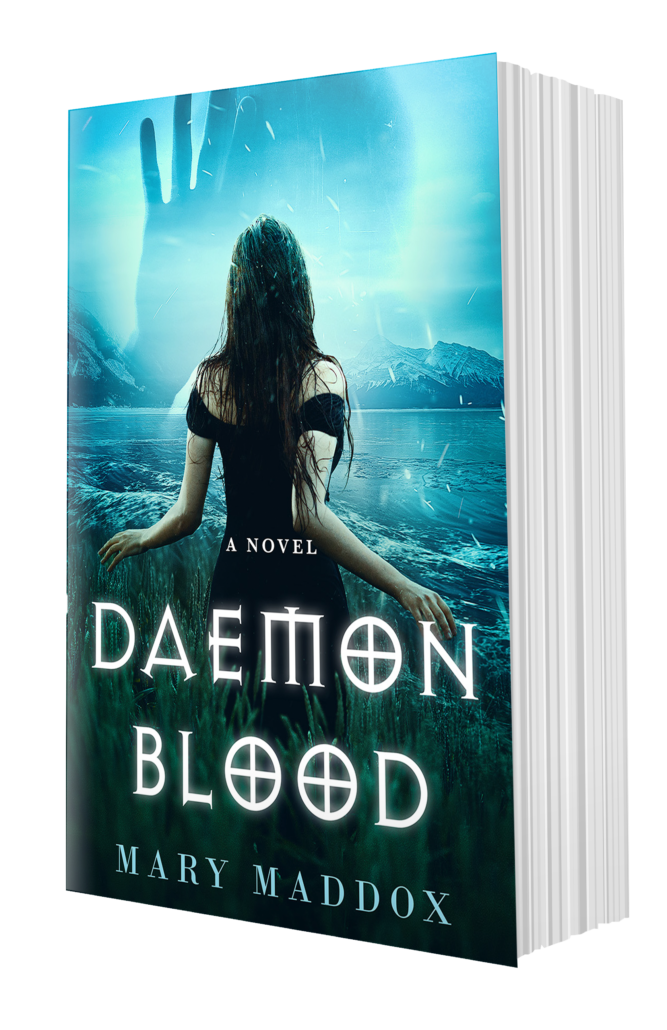 Read an Excerpt
Read About Lu and her Daemons
PreviousNext

Talion, [Maddox’s] amoral villain/antihero, is unique and interesting: a psychic vampire who sucks the spirits and humanity out of his victims, not because he’s evil, but because of his nature.

Maddox is especially gifted at fashioning imperfect heroines whose emotional journeys readers can instantly get behind. In both Lu and Lisa’s battle with the daemons, we vividly experience the fight for life’s most precious commodity: freedom.

With compelling characters and a keen sense of the darkness that lurks within us all, Daemon Blood will stay with you long after you turn the final thrilling page.

Entertaining and with nonstop action, Daemon Blood is a thrilling fantasy novel about power and sacrifice.

Lu, a telepathic demon seer, lives in Utah with her young son. When her son’s father, the demon Talion, informs her of a thwarted attack on her former best friend, Lisa, Lu begins to think that more is going on than Talion has revealed.

Lu’s telepathic abilities are a source of strength for Talion, and his enemies believe this makes him too powerful. They will not stop until Lu is incapacitated or Talion is defeated. To cement his alliances, Talion sends Lu to California to train another seer in telepathic meditation. Talion’s protection comes at a price: Lisa, who had been living a quiet life while recovering from addiction and PTSD before the attack, is dragged back to Utah to watch over Lu and Talion’s son. Then a demon war breaks out on the earthly plane, in which humans are used as unwitting foot soldiers.

This series entry does not assume knowledge of previous elements of the tale: its multiple, concurrent plot lines are supported by bits of relevant information that wend into its exposition. Lisa’s history takes the fore in the opening chapters, as her attacker is connected with her past trauma. Lu’s connected history is mentioned early on, but is explored more in later chapters that better fit into her arc. This blending adds to the fullness of Lisa and Lu’s characterizations, as it becomes apparent that they are still haunted by previous events in physical and emotional ways.

Lu narrates with immediacy, whether she is walking on the beach or being forced to inflict violence upon herself. Lisa’s narration is more removed, though it also centers her pain and pleasure. And over the course of the novel, it’s Lisa who changes in the most dramatic ways, though her present is still dominated by the events that lead to her scars. Trying to live away from demon notice brings her little peace, and she is conflicted about returning to Utah and engaging Talion. Her distress is palpable in every scene that includes her, though she still becomes more sure of herself as the novel progresses. At the same time, Lu’s role as a seer, and as Talion’s personal property, results in a rebellious streak in her. Her acts of resistance indicate her underlying strength, but are tempered by her unspoken resignation, too: she is unable to even dream of a different life.

Physical imagery dominates the prose, in which blood, sex, and violence share the same weight, if there’s more violence present than sex. The gore of demonic warfare is juxtaposed with winter wonderlands, frozen lakes, and bustling beaches and boardwalks, the latter of which fade in and out of the frame as the demons use humans to fight their battles. The darker aspects of human depravity are often too much in focus, but this is still a story in which love for a child brings brightness to the world.

Entertaining and with nonstop action, Daemon Blood is a thrilling fantasy novel about power and sacrifice.

The third installment in Mary Maddox’s Daemon World series finds a war on the horizon. Daemon seer Lu Darlington is desperate to save herself, her son and her dearest friend, Lisa. Bound to the daemon Talion through ritual, blood and a son, Lu finds herself enmeshed in the conflict whether she likes it or not. She cannot be possessed, but she watches helplessly as others become hapless pawns who do daemon bidding.

Battling the effects of PTSD from unspeakable horrors, Lu’s closest friend Lisa is unable to truly see the daemons as Lisa does. Yet she knows all too well the horrors they are capable of, despite having been saved by Lu and a daemon. Despite this, she has made the difficult choice to stay apart from the world Lu has been bound to since she was 15 years old.

But after Lisa is kidnapped, a man is killed, and she is thrust back into the memories of the horrors she once endured, she learns that her best way to stay alive is, ironically, to stick close to Lu’s side. The paradox, so meticulously set up by author Mary Maddox, creates a trove of lasting suspense that pays off again and again.

Author Mary Maddox, author of our 2016 BestThrillers.com annual pick Darkroom and 2019’s exhilarating follow-up Hometown Boys, has successfully turned her masterful eye for real-world suspense to the fantasy genre. Gripping action, clever prose and drop-the-mic thought bubbles we wish came out of our own mind are abundant (one of our favorites from Lu: “I calibrate my smile a few degrees above patronizing and several degrees below haughty”).

Maddox is especially gifted at fashioning imperfect heroines whose emotional journeys readers can instantly get behind. In both Lu and Lisa’s battle with the daemons, we vividly experience the fight for life’s most precious commodity: freedom.

Readers learn that daemons aren’t the same as biblical demons. Unlike demons, who tempt human beings to sin and then send them to hell, daemons are spirits who inhabit people’s bodies so they can experience human emotions. It doesn’t matter which emotions; they enjoy pain as much as pleasure.

In previous installments, Lu, one of the few people who can see daemons, meets and becomes friends with Lisa. However, Lisa is being stalked by a killer who kidnaps them both. They are saved by the daemon Talion, who years later decides to have Lu mother his child through a human donor. Solomon is born with unusual powers. (All of these details take readers some time to discern.)

Now Lu has been sent to California to instruct another daemon seer, while Lisa cares for young Solly. She’s fond of the boy, but also fears his powers, which are demonstrated on a preschool bully. Meanwhile, two daemon factions, who inhabit humans to fight their battles, vie for dominance. The only way to avoid war, and inevitable Armageddon, is a sacrifice. But who will it be?

Daemon Blood is an episodic novel with conflict after conflict throughout. Maddox skillfully ties them all together. Talion, her amoral villain/antihero, is unique and interesting: a psychic vampire who sucks the spirits and humanity out of his victims, not because he’s evil, but because of his nature. Lu and Lisa are strong, believable women characters, roles uncommon in supernatural horror novels.

The story can be confusing, however, as chapters generally alternate between Lisa’s and Lu’s viewpoints, and the two friends are enough alike that it takes a page or two to determine who’s telling the story in each chapter.

Despite this, Daemon Blood is recommended for those addicted to the horror genre. However, the novel will be much more satisfying for those who have previously read the first two installments.

This is my first book by Maddox. I wondered if, not having read Talion, I would feel a bit lost. However, I can confirm that this book is the start of something new, even though it carries on, in some ways, from the earlier book. Maddox makes a point to give us plenty of detail and description to bring the characters and world to life. She then blended it with a unique and exciting blend of horror and fantasy. I loved it. I would say, after going back to read Talion, that it is more fun when you read it and then this, but can be done either way.

We return to the lives of the two main characters from Talion. However, we are a few years down the line and their lives have moved forward, they have grown and they need each other again. We are reminded of who each character was, what has happened to them and why, briefly. Then Maddox goes on to really bring the characters to life again. She revives their personalities and gives us detail on what is happening at the moment. I enjoyed getting to know them and found them both strong and fascinating ladies.

The story of the Daemons is a really interesting one. They are different from some of the typical tales of daemons, and I like this fresh take on them. We are descended upon by those who intend to do good and those who are filled with evil. They each have their own place and interact with the world and people differently. Getting to know them, as they injected themselves in the world was just as exciting as getting to know the mains.

I loved that the story felt like a horror story, with the angst, fear and surprises mingled throughout their journey, but that it also had a decent amount of fantasy blended into it. I thought it was a good mix and Maddox really created something unique and very addicting.

The pace was perfect for this style of horror. I was kept moving swift enough to really feel that I was on an adventure, where so much was at stake, and kept on my toes, wondering what would happen next. I liked that, though it did really make it hard to put the book down, not that I’m complaining.

I highly recommend this read, as it is something new and refreshing for the genre and is very enjoyable to read.