Sometimes going home is the most dangerous thing you can do.

Junkie burnout Troy Ingram murders an elderly couple outside small-town Morrison, Illinois. He’s supposed to make it look like a robbery, but there’s so much blood he panics and flees. When he’s caught by police, he falls back on Plan B: tell everyone who will listen his motive was revenge on the Durrell family.

See, twenty years ago, Kelly Durrell broke his heart and ruined his life.

When Kelly returns to Morrison for the funerals, leaving her life in Boulder still packed in boxes and her relationship with detective Cash Peterson in its infancy, local gossip is quick to reach her. Troy’s story doesn’t make sense, but everyone in town seems happy to blame Kelly.

She can’t even turn to her family for consolation: she and her mother get in an argument every time they talk, her dad doesn’t want to make waves, and her cousins are too busy fighting over their inheritance to care about anything else.

But Troy’s lawyer, Lizzy D’Angelo, is sure someone forced Troy to commit the murders, and that Kelly is the key to finding out who. With Lizzy’s help, Kelly starts digging. Soon she discovers just how many secrets a small town can hide.

Can Kelly shine a light in her hometown’s dark corners without getting herself and her family killed?

Hometown Boys is a smart, tension-filled thriller that will keep you riveted until the surprising, satisfying end. 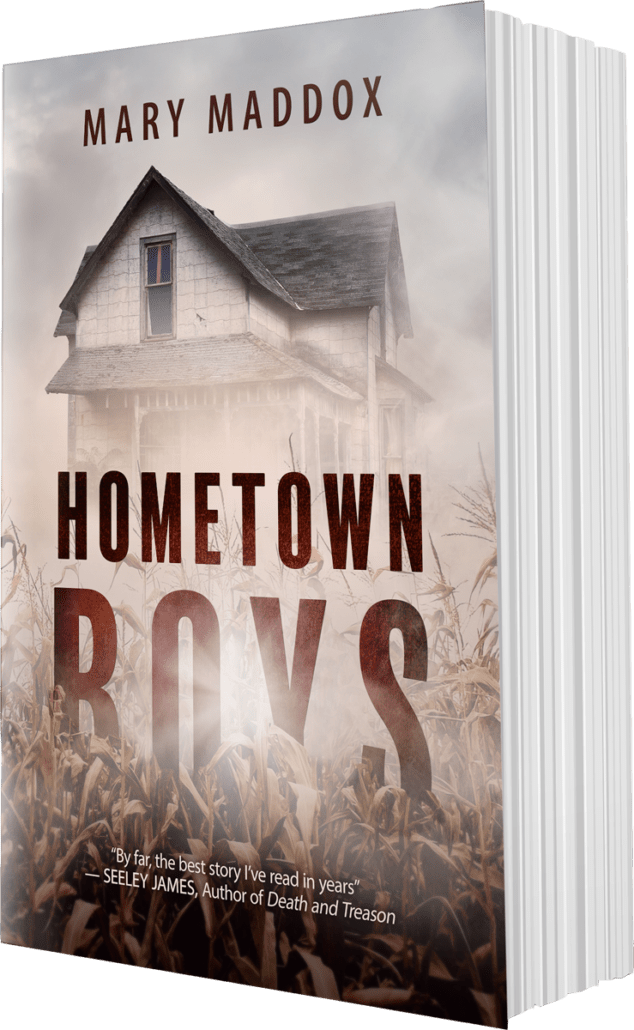 [Hometown Boys is] by far, the best story I’ve read in years.

Don’t miss this white-knuckled thriller from the dark princess of suspense.

The Illinois prairie has rarely seen this much suspense since North by Northwest.

The author doesn’t pull any punches, with a fair share of violent moments and one particularly unnerving scene that will convince readers to check their restaurant food thoroughly.

In this second installment of a thriller series, a woman returns to her hometown for a funeral and winds up in the middle of both a family squabble and a murder conspiracy.

Kelly Durrell has lived in Colorado for the past eight years but left her Morrison, Illinois, hometown two decades ago. She’s estranged from her parents, who never approved of her drug-dealing high school boyfriend, Troy Ingram. Her reason for being back in Morrison is the funeral of Uncle George and Aunt Sarah, victims of a brutal double murder to which Troy has already confessed. Word around town is that he claims he killed them because Kelly broke his heart when she dumped him prior to leaving Morrison. Surprisingly, his lawyer, Lizzy D’Angelo, wants Kelly’s help, as she believes someone coerced Troy into committing the crimes. Meanwhile, George and Sarah’s kids, Heidi and Ray, are feuding over the inheritance. Kelly’s dad, Jack, is executor of the estate, but his apparent apathy prompts her to step in and take a closer look at the finances. She soon suspects Heidi or Ray may have somehow orchestrated the murders. Her ensuing search for answers incites more than one individual as things escalate into assaults, kidnappings, and more killings. Maddox (Darkroom, 2016, etc.) so precisely crafts characters and backstory that Kelly’s involvement in the slowly building mystery is organic. For example, helping Lizzy can clear up the Kelly-centric rumor of Troy’s motive and simultaneously identify the person truly culpable for her aunt’s and uncle’s homicides. While readers are privy to the initial killings, the subsequent murders as well as a frightening attack against Kelly are shocking. The story is often bleak: The death of Kelly’s sister, Beth, a few years earlier seemingly torments her parents, and both Heidi and Ray are dubious enough to be behind the homicides. Likewise, the author doesn’t pull any punches, with a fair share of violent moments and one particularly unnerving scene that will convince readers to check their restaurant food thoroughly.

We meet him riding in a car down country roads, jittery with drug withdrawal, alongside a man and a woman who don’t think he knows they intend to kill him.But first, the trio plans to In Cold Blood an old couple at a lonely farm.

Tory Ingram, the addict, first stabs the old man at the door, and then his wife in the bedroom, remembering how she had brought him lemonade when he was working as a handyman on the farm.
Mary Maddox starts an ominous clock ticking on the first page of her new suspense novel, Hometown Boys. And it means that Kelly Durrell, her heroine from the excellent thriller Darkroom, is in for more trouble.

While burying the murdered couple, her aunt and uncle, Kelly unearths her own haunted past. Because the sexy abuser she dated in high school is the hollowed-out man who killed them.

Back in a small Illinois town where the gossips are eager to consider her somehow partially responsible for the murders, Kelly returns to an uneasy relationship with a mother who refuses to forgive her for some unstated but not unpunished crime, probably her survival. The mother is frozen in the hostility of grief over the death of Kelly’s younger sister. Even the fact that Kelly brings tea into her mother’s kitchen is a cause for mild reproach.

Add to that Kelly’s continuing economic marginalization. Out of work since the horrific events of the previous novel, Kelly fears losing her Boulder apartment, but is equally afraid that moving in with her police officer boyfriend may bruise their new and provisional relationship.

In 21st century America, no crime is so heinous that someone will not get on Facebook and publicly praise the criminal — a fact Maddox has observed and uses here. One of Troy’s lowlife friends is defending him on social media, and she’s also revealing embarrassing intimate facts about Kelly she learned from Troy.

Against her better judgment, Kelly finds herself being drawn into the penumbra of a small town that’s fraying around the edges.

In Morrison we see protracted, familiar shadows cast across the streets of a recognizable Midwestern town, where the years of lost economic opportunity and back-burner bitterness have curdled into drug addiction and crime.

Once again, Maddox sketches the sketchiness and marginality of contemporary American life in a forgotten rural community — a Dollar Tree world where nothing matters much any more, where pleasures, loyalties and lives prove fleeting.

“They pass a repair garage fronted by broken and oil-stained concrete, a store selling packing materials, a store advertising Batteries of Every Variety, a collapsing gas station with holes where the pumps used to be, a grade school with a cyclone fence hemming a cramped playground that contains monkey bars, a swing set and a slide pocked with rust. Jefferson Avenue reminds her of a vine with its leaves shriveled or wilting.”

Schemes surround the millions of dollars worth of farmland left by Kelly’s aunt and uncle. A suspicious death is quietly ignored by the authorities. And a storefront that’s a cover for a drug operation—the ironically named Trophies Unlimited—fits somewhere into this crepuscular picture.

The police are compromised. The murders mount. Like some unwanted and dangerous animal, the darkness has followed Kelly home.

The moments of brutality are balanced by the evocative clarity of Maddox’s description. A well-dressed woman at a rural funeral “flashes like bling in a dirt road.” Kelly’s childhood church “…feels empty, as though most of her memories have been moved into storage.”

Occasionally, Maddox even washes away the weariness and dirt of humanity for us, letting us sense the solid, enduring values still buried somewhere in the weary Midwestern land.

An Illinois two-lane highway “…aims straight and flat toward its vanishing point. Sun-soaked fields of corn and beans fan open toward the horizon. A windbreak of trees cuts a hard line between two fields. Bright cylinders of grain silos, triangle roofs atop rectangle farmhouses, and a blue expanse above — a landscape of geometry and sky.”

The mistrust mounts, the shadows lengthen and the reader is blindsided by a hard, sudden turn. The Illinois prairie has rarely seen this much suspense since North by Northwest.