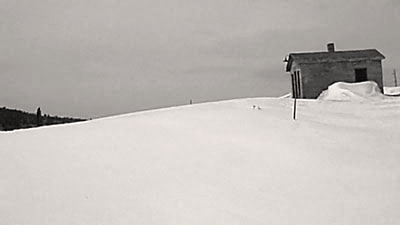 Dark and violent, but a love story nonetheless. “What Love Is” appears in Volume 2 of the anthology What We Talk About When We Talk About It, published last October by Darkhouse Books.

The inspiration for my love story grew from my early childhood in Soldiers Summit, Utah. The town was mostly ruins, the wooden husks and concrete foundations of railroad housing and a few commercial buildings, decaying in the dust and sagebrush. My father, like Dee’s, worked as a dispatcher at the railroad depot there. My brother and I played with two brothers who lived next door. Mickey and his brother are based on them. Our mothers became friends and stayed in touch after they left Soldiers Summit. Both women ended up divorcing their husbands. Although I saw the boys every so often, there was no puppy love between me and either one of them. Their mother died of cancer when the younger boy was seventeen, and he shot himself soon afterward. I can only guess why. Grief for his mother, feelings of abandonment and despair.

Soldiers Summit has kept a lasting hold on my imagination. For years I dreamed of the place regularly—lonely, haunting dreams.

Another inspiration for the love story was my strong emotional response to smells. Even after decades, certain smells evoke the circumstances around them—the catsup and eggs my father was eating when he quarreled with my mother at breakfast, the diesel fumes in the bus station when my brother and I traveled between one parent and the other, the alcoholic breath of a boy whose kiss I did not welcome.

I wonder whether love begins—or dies—with a response to the way someone smells and to other cues that register unconsciously. I wonder whether Evening in Paris, or any other perfume, can disguise the truth for long.

For those who want a sample, here are the opening paragraphs:

“I’m gonna marry you when we grow up.”

Even then Dee felt unsettled by Mickey’s eyes. They were blue, smudged with an emotion she couldn’t name. They demanded yes from her.

Yes was easy at age four, when every day went on forever and growing up was unimaginable. Their fathers worked as dispatchers at the railroad station in Soldiers Summit, Utah. A few years later, the station would close and the town would dwindle to a café and gas station on a secondary highway. It was already in ruins. She and Mickey explored the cellars of houses long ago demolished, rows of square cement holes ranked along a hillside fuzzed with sagebrush. They found dangerous things: two-by-fours with rusty nails hammered through them, shards of blue and green glass, barbed wire. And mysteries: a silver box without a lid, a book with its pages rotted away.

Dee would never forget the smell of those abandoned cellars, the open graves of homes. Spring after spring they collected snowmelt that soaked the remains and slowly dried in the summer sun and wind, seasons of decay like growth rings in a tree trunk.

Just outside town was the ruin of a restaurant, a long single-story building caved in at one end. The walls at the other end stood precariously beneath the weight of the sagging roof. Sections of the floor had been pried up, and the moldering breath of the cellar enfolded Dee and Mickey as they wound between the damage to the restaurant’s counter. Drilled holes with blackened edges showed where stools had been bolted onto the floor. But behind the counter was solid floor and an interior wall with shelves. This would be their house, Mickey said. On the shelves they arranged the silver box, the rotted book, and the shards of colored glass. Under the counter was their bedroom. They snuggled there, his breath warm and damp against her neck.

They were forbidden to play in the ruins, but it was easy to sneak away. Dee’s mom was usually busy with housework or laundry and chasing after her two-year-old brother. Mickey’s mom stayed inside their house, especially after lunch. When Mom asked where they’d been, Dee said the viaduct or the slope by the train station.

“Don’t go near the edge,” Mom would say, frowning. “Keep off the tracks.”

Dee shook her head in a solemn promise.

One day she announced that Mickey wanted to get married when they were grownups.

She was shocked by her mother’s vehemence. “How come? You like Mickey, don’t you? You like his mom.”

“You’re too young to think about marriage, little girl.”

The two families lived next door in the one row of houses still standing. At night she heard Mickey’s parents bumping into walls and screaming, and the next morning his mother came over to drink coffee and show Mom her bruises. Mom wheedled Dad to talk to Mickey’s father.

Read the rest of  my love story “What Love Is”—along with a diverse selection of other stories and poems on the theme of love—in What We Talk About When We Talk About It. 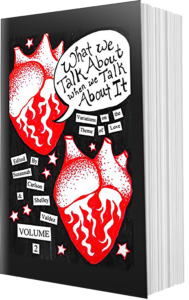