You’ve heard rumblings about it, now it’s finally here. SIN EATER by Pavarti K. Tyler and Jessica West is available now on Amazon.com. Check out the excerpt and giveaway at the end of this post! 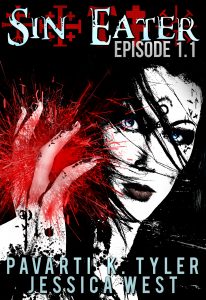 From Award-Winning Author Pavarti K. Tyler and Speculative Fiction Author Jessica West, comes a Dark Urban Fantasy serial about evil, and the next step in its evolution.

A Sin Eater who battles demons for souls

A Priest who must protect what he most desires, even from himself,

A rogue Romani mortician with an attitude, a secret, and a powerful weapon,

Born into a world rampant with demon possession, Nik Grekh struggles to keep Hell’s hordes from consuming the world, but he grows weary of the constant battle against sin. Evil grows stronger as more souls are lost. With each new possession growing increasingly violent, Nik fears he may be losing the war.

When Nik confronts a demon he can barely defeat, he reaches out to the only man who can save him. The only man he trusts. The one man he can never have…

Evil has resided alongside humanity since the beginning of time, feeding on our weaknesses, our vices. Our sins. It hungers for our souls, its demonic offspring possessing humans, corrupting, manipulating, using us as unwitting pawns in a supernatural chess match for the ultimate price: life.

The Crucifixion of Christ saved humanity once. What will it take to save us this time?

Sin Eater 1.1 is approximately 10,000 words or 45 pages, and is the first of seven episodes in the first season of the Sin Eater serial. If you don’t enjoy serials, you can pre-order the full Box Set on Amazon.

A Note About Serials: These are not stand alone books, however, if that drives you crazy, you can PREORDER the full box set now:

For those reading alone as each episode is released, here is the full schedule:

“You can’t kill this man and that’s the only way you’ll get rid of me. You can’t take an innocent life without opening yourself up to my kind. So go ahead, kill him, and then I’ll wrap myself in your shell and consume your soul.” The monster licked its lips.

The leaky, red eyes of the demon’s host displayed the first real signs of fear. It was all but beat. He was almost finished.

“Behold and obey. By the power of Christ, invested in me by the Kingdom of Heaven and its mighty King, I command you to yield. For this vessel is a child of God, sacred unto him.”

Beads of sweat popped out on the brow of the man before him, now crouching and glaring up at Nik. One side of his face had melted away, leaving only sinew and bone. He curled his arms and fists, making his biceps bulge with effort.

Nik drew the sign of the cross on the demon’s flesh with his own blood.

“Tell me your name! The blood of Christ compels you!”

The man’s bulging muscles shook. He ground his teeth, trying his best to stop from revealing his name and giving Nik the only thing he needed to destroy him. He screamed, a long and low furious yell that revealed the only thing that might have kept him safe: “Naamah.”

The black from the demon’s eyes receded into its head, traveling the surface of the man’s skin and turning it gray. He opened his mouth and a black cloud rushed out, choking its former host as it was expelled.

The monster let out a shriek as the last of its hold on the man was ripped out, sliding out of his human host’s mouth and into a black glob on the street.

The man came to his senses. Confusion showed in his eyes as his mind was once again able to access his body. As the evil left the man’s body, he slumped to the ground and Nik lowered with him. Nik stayed just long enough to make sure the man’s pulse was stable. His job was to get the evil out, not to worry about what happened after.

Nik’s head spun, he was too exhausted, sick, and confused to reason it out. He’d exorcised the demon. That’s all that mattered. He’d figure out the particulars later.

The blood on Nik’s hand glowed a deep red in the darkness as he reached out and grabbed the evil before him. With a silent prayer, he picked it up, black sin wrapping around his fingers like tentacles. Bile rose in his mouth at the thought of what he needed to do next. Twice in one night.

The throb in his head began again and Nik stuffed the evil into his mouth, swallowing its slick putrid essence in one gulp.

Nik stood, but he swayed and leaned heavily on the wall to his left, unable to see through the dark haze that descended over his eyes. He felt like someone had snuffed him out. Cold gripped his body, seeping into his bones, pulling him down, crushing him in its icy fist.

He instantly regretted treating this one as he had every other. He should have known better. There was nothing about this possession that had been like the others. After everything he went through to beat this thing, he came right back around to the same thought as before. This would be the one that killed him.

And now the fun part!