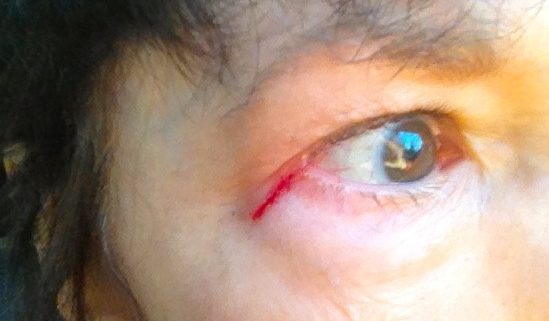 Thirty years ago Joe and I lived in a beautiful house overlooking a lake. It was his second year of teaching at Eastern Illinois University. Uncertain whether we would settle permanently in Charleston, we leased the place from a professor on sabbatical.

The house had an unpaved driveway that wound steeply downward to a gravel road. Since trucks had to come up the driveway to deliver propane for the furnace, heavy snowstorms made us nervous. But the living room had a glass wall offering a view of a ravine. In early spring when the redbud bloomed, the ravine exploded with color.

I wrote fiction in an office in the walkout basement. One morning in the spring, I suddenly felt the need to take a walk. My writing was going well just then, so the urge made no sense. Leaving the basement, I descended the winding driveway and turned right on the gravel road. This direction led to a stone quarry about a mile away. 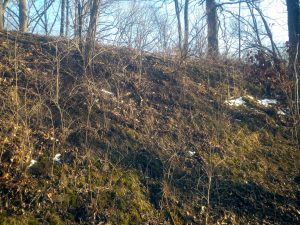 I wondered if I was going to the quarry. It felt strange not having a choice, but I wasn’t frightened. Shortly after passing the ravine, I turned and began to climb an embankment steep enough that I needed both hands and feet to clamber up. It was about fifteen feet high. At the top I found myself in a clearing with a few trees, weeds and sparse grass, and rocks embedded in the hard ground. I wandered the clearing and stopped in front of one particular rock. A voice in my head said, Here.

I knew then the rock marked a grave and I’d been brought there to see it. The possibility of a ghost occurred to me, but I didn’t take it seriously. I was, after all, an inventor of fiction with a lively imagination 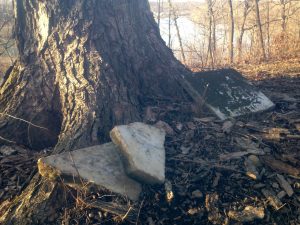 Summer came. Shortly before Joe and I moved out of the house, I took a last walk along the gravel road. I loved the place despite the difficulties of living there and was sorry we had to leave. Approaching the embankment, I saw the sign: Kelly Family Cemetery. I climbed up to the clearing and saw it had been cleaned up. The weeds had been pulled, and dirt swept from the rocks. They were old gravestones. I found the one where I’d been taken a few months ago. I tried to read the engraving now visible, but it was too eroded by time. 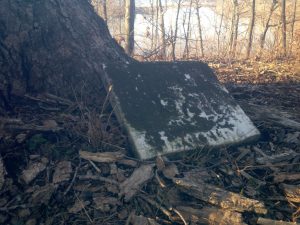 Someone named Kelly wanted me to know that she/he resided nearby.

Several  years  later I heard a story about the house. The professor went on unpaid leave and leased it to a man who moved out after a few months, claiming it was haunted. He sublet the house to a woman who decided she didn’t want to live there either. Before leaving, she tried to sell the furniture. Luckily, one piece was very distinctive—a massive, elaborately hand-carved table the professor’s wife had bought in Mexico. I remember that table well. Dusting it was a tedious job. Someone else remembered it too, and the woman was busted. 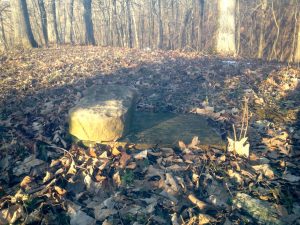 Today I revisited the spot. The sign is gone, but I found remnants of the old cemetery in the clearing. Climbing the embankment, I got clawed by a vicious branch. (See photo above.) Maybe something wanted to keep me from going up there to take pictures. Or maybe today was muddier, and I’m not as young as I was then.

I neither nor disbelieve in the paranormal. When a phenomenon seems to exist but cannot be verified empirically, I’m an agnostic. I feel no driving need to hunt down the truth one way or the other. It surprises me how few people can tolerate the uncertainty of agnosticism. They must either devoutly believe or strenuously disbelieve.

Readers of Talion know the novel has paranormal elements but leaves open the possibility that Lu, the girl who sees demons, might just be out of her mind. The novel’s ambiguity reflects my attitude toward the paranormal. It also puts off readers who can’t handle ambiguity.

The sequel to Talion leaves no doubt as to the existence of the demons. Some readers resist the notion of demons invading an otherwise realistic world, but these particular demons refuse to go away. Why should I ignore them any more than I ignored the ghost—or whatever it was that summoned me to a neglected grave?

When an idea sparks a story