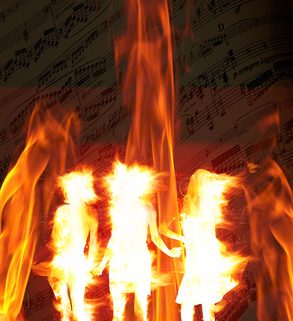 I’ve been working hard to finish the current revision of Daemon Seer. It’s not  the final revision (is it ever?) , but the novel is complete except for minor changes. My monomaniacal focus on finishing has led me to neglect Ancient Children, so instead of a book review or feature I’m offering the first couple of pages of Daemon Seer. Those who have read Talion will recognize the narrator, Lu—she’s 25 now—and a couple of other characters that she mentions.

Talion will also be back for the sequel—and he’s bringing all his friends.

Chapter 1: The Co-Star of My Worst Nightmare

“I know who you are.” Ken leaned back in his desk chair and folded his hands. As usual he had on a gaudy jacket and clashing bow tie. His forehead and cheeks shone apple-like in the florescent ceiling light.

I thought of a smart-ass comeback –You ought to know, I’ve been working here for months – but it wouldn’t help matters any. The book was lying right there on the desk, a photograph of college professor Rad Sanders staring up from the cover. Rad looked nondescript, of course. Serial killers always do. Above him the book’s title screamed in lurid yellow: Professor of Death. Beneath his chin crawled the name of the author, Willard Steeples.

“How did you figure it out?” I knew Ken was itching to tell me. Otherwise he wouldn’t have summoned me to his office on work time. He scolded us for using the restroom when we weren’t on break.

“Two things,” he said. “Your name, Luanda. It’s quite unusual. And the town, Deliverance. It’s on your job application you went to high school there. So when I read about Luanda Jakes, one of the girls who escaped from this serial killer here, I thought, wait a minute, there can’t be more than one Luanda in a town that small. It so happens I have a cousin in Deliverance. I called him, and sure enough, he said the folks at Hidden Creek Lodge adopted Lu Jakes. He remembered their name. Darlington, the name you have now.” Ken finished with a smug smile, like I was supposed to gasp at his brilliance in tracking down my past.

“I really don’t like talking about it. I’m trying to get on with my life.”

When Willard Steeples asked to interview me, my foster mother, Debbie, had hired an attorney to threaten him and his publisher if anything about me, apart from facts of the crime that were public record, appeared in his sleazoid book. The publisher had backed off fast. Nobody had tracked me down. Until now. If Ken started blabbing, my coworkers would treat me like a freak and eventually reporters and sickos would come slinking to my door.

Ken lurched from his ergonomic chair, circled the desk, and put his hand on my shoulder. “You poor girl. It must have been terrible, seeing your dad killed right in front of your eyes.”

It had been traumatic — all that blood — but Duane Jakes was no great loss to the world.

Ken was massaging my shoulder. I fought the intense urge to shrug him off. Along with being my boss, he now had this secret to hold over me. So I let silence and passivity send the message. After a minute he got it. He eyed me with that way of his, sullen and kind of pitiful, like a dog driven away from the dinner table. You could say Ken would settle for scraps. He just wanted to cop a feel now and then, and I wouldn’t give him even that. Finally he removed his loathsome hand.

“I won’t tell anyone if you don’t want me to. But you killed that monster. You’re an honest-to-goodness heroine.”

“Thanks,” I muttered. “Guess I should get back to work now.”

“Yes.” He patted my shoulder one last time. “Good girl.”

I escaped back to my station.

“What did he want?” asked my coworker Alice. Maybe it was her eyeliner, the way it curved beyond the outer corners of her eyes, but she looked gossipy and sly. If she ever found out my secret, she would tell the world.

“What do you think?”

I spent the afternoon watching employees at Granville Imports, a business in Long Beach, California. Cyber Watch was in Salt Lake, but Ken had us spying for companies across the nation. One woman had figured out a system to work her eBay store in between creating shipping manifests. She would finish a batch, start printing them out, and then hop online to her seller’s dashboard. She stayed long enough to scroll through a few listings — Hummels, cut-glass dinner bells, and whatnot — or dash off an answer to a bidder’s question. Never longer than sixty seconds.

At first I couldn’t get a screenshot to prove what she was doing. Every time I checked on her, I caught just a flash of the browser window before it disappeared. This woman had to know she was being spied on. She’d installed a program that closed her browser when my remote eye landed on her, so I set the remote eye to take a screenshot the microsecond after it moved to a new target. I finally nailed a shot of her eBay dashboard and — bonus time! — a shot of the You Porn homepage on her supervisor’s monitor. A week ago I’d turned in the evidence and reported my suspicions.

The supervisor got fired, but someone at Granville gave the woman another chance. She was behaving herself now. She wasn’t using her phone to go online either. No phones except on breaks and for verifiable emergencies, a ban Ken always recommended to his clients. Of course he imposed the same ban on us.

Instead of going straight home after work, I strolled from the building where I worked to the Mormon temple in downtown Salt Lake. The two blocks seemed longer in my three-inch heels and pencil skirt, and my car was parked in the opposite direction. But I needed to calm down, and the temple grounds usually relaxed me. Not that afternoon. I hardly noticed the flowerbeds and tranquil fountains, the smell of roses mingled with traffic fumes, or the tourists gawking at the golden statue of Moroni blowing his horn from the temple’s highest steeple. I didn’t even snicker to myself at the name Moroni or wonder why Joseph Smith couldn’t think of something less ridiculous for his angel of revelation.

Ken’s revelation had me too anxious. He was bound to give up my secret. I imagined him at some backyard shindig casually letting it drop. You won’t believe this, but a girl who works for me was kidnapped by a serial killer . . .

My body remembered that night in the mountains with spells of dizziness and trembling. The fierce cold, even in summer. In nightmares I was falling into Rad’s bottomless gaze. Or I was splayed on the ground, my wrists and ankles scoured with pain. He didn’t torture me, but he staked Lisa to the ground on a tarp, the kind you lay underneath a tent to keep moisture out. Her blood pooled on the plastic.

The spells and nightmares had been going on for years, but lately I was having new symptoms. Moments when color leeched out of the world and bleakness sucked the life from me. Moments when pain seized my belly like a fist and I ached with hunger, not for food but something nameless. Two days ago, a fierce cramp had bent me over. My nose almost touching the keyboard, I could barely hear Alice whispering. Was I okay? Did I need to use the restroom? But the cramp hadn’t been my period, which had ended a week ago. The whole thing baffled me and pissed me off. After ten years I should be healing, not spiraling into some kind of weird post-traumatic syndrome.

I was a teenage changeling
2 replies