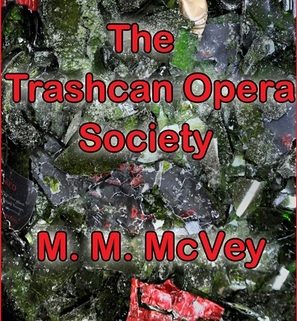 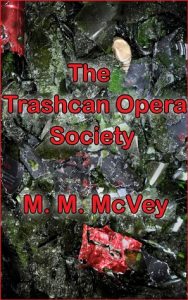 M. M. McVey’s novella The Trashcan Opera Society tells the story of the doomed love between Jordan, a onetime attorney who lives on the streets of Los Angeles, and Hannah, an aging stripper. The two meet when Jordan inadvertently saves Hannah from a violent patron by vomiting on the man.

McVey’s omniscient point of view keeps its distance from the characters and describes their world in a tone that manages to be both clinical and poetic. The narrative voice put me off at first. Occasionally it seems stilted or strained, but it’s the right voice for a story that blends harsh realism with operatic melodrama.

The characters are complex and unpredictable and very human. Not many homeless guys have premium season tickets to the opera. Not many strippers have the insight to their circumstances that I see in Hannah. I came to care about these two lovers who accept their hopelessness with such grace.

The author has a talent for description. Often I was impressed by the vivid detailing of scenes, but now and then I became impatient and wished the story would move faster. Take this  paragraph describing a chair in which Hannah is about to sit.

There was an old government gray chair resting in front of Donny’s desk that served as a resting place for the few visitors ever invited into his office. One spring, under the right side of the chair’s cushion was broken, forcing anyone sitting in the chair to tilt their body to the other side. The arm rest on the left side was worn through in most places. The exposed padding was gray with years of sweat and body oils. The remaining leather was slick as a saddle horn from a dime store mechanical pony.

I know exactly how Hannah feels sitting in that chair, but the knowledge serves no dramatic purpose. The chair merely reinforces the impression made by quite a few other paragraphs of description spread throughout the story: the joint where Hannah strips is a real dive.

In general McVey repeats too much. Readers are told over and over about Jordan vomiting on the man who attacked Hannah and about Jordan’s education and intelligence. I learn so much about Jordan so quickly that later revelations about him lose much of their impact.

My biggest disappointment with The Trashcan Opera Society is the sloppiness of the copyediting. Indie books usually contain more mistakes than books by commercial and small presses, and nobody is perfect, but this novella is closer to a workshop draft than a polished revision. It contains numerous errors and inconsistencies in punctuation and usage. Obvious errors have escaped correction. Several times its is used in place of the contraction it’s. Hannah has “taught stomach and leg muscles.” Lightening is used in a context where lightning seems to be intended, and discrete in a context that calls for discreet.

I encountered too many passages that made me want to reach for a red pen. Here’s one example:

The eyes acquire signs of aging early in a dancer’s career. It is due to  . . . the hard squinting to see if the paper money being waived before their body is a ten dollar or a one dollar bill.

If you see nothing wrong with the above passage, ignore my criticisms. As I wrote in a post last year, errors bother some readers more than others. If you see the errors and want to read The Trashcan Opera Society anyway, treat them like Jordan’s outward appearance. Overlook the scruffiness and you’ll find a moving story and characters worth knowing.

Violence and ambiguity in Talion
Scroll to top