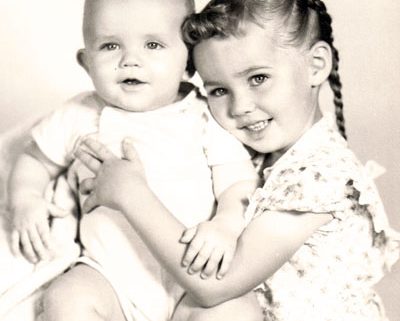 My brother was born fourteen months after me, and we played together all the time. We invented characters and acted out stories, making up the plots as we went. We kept our fantasies going for weeks at a time. I think our make-believe began when I was six and Steve was five, during the time our parents’ marriage was self-destructing. It went on for years. We stopped when Steve reached adolescence and became embarrassed to play with a girl.

When I was seven, we wrote down and illustrated one of our stories in a blank coloring book. I remember the paper, pulpy and slightly yellow. I can almost picture my childish lettering and the map of our imaginary country drawn in crayon. But I can’t recall the story. In fact, I can’t recall any of our stories. Since the book was lost long ago and Steve is dead, there’s no way to jog my memory.

This make-believe was a large part of my childhood. It connected me to my brother. Losing it feels like losing part of myself.

An article in the March issue of Wired reassures me that I never had any permanent memories to begin with – not in the sense of having an accurate recollection of our fantasies and the times we spent together creating them. In “The Forgetting Pill Erases Painful Memories Forever,” Jonah Lehrer reports that scientists have isolated the chemicals that create memories and the chemicals that erase them. Great news for post-traumatic stress victims, drug addicts, chronic-pain sufferers, and other people whose lives have generally sucked.

But right now I’m interested in recovering a few memories. Science offers less hope in that direction. It seems none of our memories are accurate anyway since, Lehrer explains, “the very act of remembering changes the memory itself.”

The brain has to synthesize a lot of proteins and fire up lot of neurons every time it creates a memory. As Lehrer puts it, “The past has to be wired into your hardware.” You might think that once the wiring was there, it would stay put. Not really. Various unsavory experiments involving the torture of innocent rodents show that “every time we think about the past we are delicately transforming its cellular representation in the brain, changing its underlying neural circuitry.” In other words, each time you recall something, the brain rewires the memory, but not quite in the same way.

Think about it: every time you remember an event, it becomes less true. If by true you mean what actually happened. The implications are unsettling. Most of us construct a self based on our past – a past we think is real. “That sense of authenticity,” Lehrer says, “is the biggest lie of all.”

It follows that “every memoir should be classified as fiction,” but I disagree with Lehrer’s dismissive conclusion. I think the point of memoir is to bring some stability and permanence to the flux of memory. Once written, the memoir is no longer subject to the vagaries of brain chemistry. At least it records what was true for the writer at the time of writing.

I want to remember the make-believe between me and Steve. So what if it’s not a precise recollection of what happened all those years ago. I’ll take images reduced to ghosts by too many washings in brain enzymes. I’ll take illusions.

Gotta have that try