The pivotal moment came during the alumni book signing at my college reunion last fall.

I attended Knox College, a private liberal arts college in Galesburg, Illinois. Knox boasts one of the finest undergraduate creative writing programs in the country, a program just beginning while I was a student there. But graduates from Knox go on to success in many fields. Biologists, historians, political scientists, and educators sat alongside the fiction writers and poets at the tables in the Ford Center for the Fine Arts. The book signing began after Homecoming Convocation as the crowd emerged from the auditorium and filed in front of our tables – so many tables they stretched the entire length of the lobby.

Quite a few people glanced at my paranormal thriller Talion, but few lingered more than a moment or picked up a book. I was selling several copies to old friends and one or two to strangers. Not as many as I’d hoped. Then a woman came over and scrutinized Talion for a few seconds. “I’m not buying your book,” she announced, “because I don’t like the cover. It tells me nothing. I have no idea what the book is about.”

I began my one-sentence pitch, but she was already walking away. Okay, I thought. That was rude.

She wasn’t the first critic to pan the cover. Some reviewers disliked it. One even urged readers not to hold the cover against the novel, which was actually quite good. Poor novel, doomed like me during my unhappy teen years: “A pretty girl, really, too bad she has to wear glasses.”

A week or so later, a friend who had just finished Talion mentioned that the text contained a few typos and offered to point them out if I ever issued another edition. Reading his kind email, I realized the decision was in my mind, already made, just waiting for me to notice. There had to be another edition of Talion with a better cover. 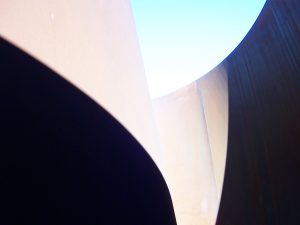 The image on Talion‘s first cover is a photograph taken by Joe Heumann, the love of my life. It has a brilliant abstract beauty that evokes the beauty my protagonist, Lu, sees in the apparition of Talion. I lacked the skills to make a book cover, so I contracted a graphic artist, Richard Reynolds Taylor, who created a beautiful cover from the photograph I gave him. But as the blunt lady pointed out, it delivers no message. The image has zero connection to the story except in my mind. 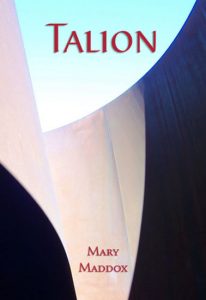 I can’t believe I made such a dumb mistake, expecting readers to make a mental leap without sufficient information. A mistake I’ve warned my freshman comp students not to make too many times to count. Worse, I underestimated the importance of having a book cover that would intrigue potential readers and hold their attention for longer than a second. Sure, you shouldn’t judge a book by its cover, but as readers scan books on a shelf or thumbnail images on a screen, they have no basis on which to choose EXCEPT the cover. Jeff Bennington, author of the horror novels Twisted Vengeance and Reunion, puts it concisely: “Your cover needs to grab a reader’s attention, draw them in, or create enough curiosity to earn a ‘click'” If only I’d read Jeff’s book The Indie Author’s Guide to the Universe before publishing in the first place.

I decided to give Talion the cover it deserved, a cover that expressed the drama and atmosphere of the story. Exploring online, I found more than a dozen graphic artists who would create a professional cover for fees ranging from $300 to more than $1000. But I wasn’t shopping for the least expensive option. Not this time. I wanted an artist with a fantastic imagination and distinctive style, and I found him in Duncan Long.

Duncan is a professional who has created cover art for major commercial publishers. And he is prolific. His gallery displays numerous examples of his work in various genres. Looking through them, I was struck by how original his art is. It stands out from all the rest of the covers I viewed in my search. His style and imagery create a world that is distinctively his own. A world where Talion is at home.

Although the cost of the new cover might not be recouped in additional sales, I consider the money well spent. When my next novel is published, I want as many readers as possible to remember Talion.

A record of what never happened

Finding another way
Scroll to top