A month ago I posted an essay on second-person point of view and its ambiguity and rarity in fiction—especially genre fiction. Thanks to that post, I learned about a crime thriller, Bigger Than Jesus by Robert Chazz Chute, in which the protagonist, a hitman, narrates the story entirely in second person. The concept interested me. I wondered if the author could sustain the narration for two hundred or more pages. He does. Bigger Than Jesus is a stylish thriller with a likable antihero and an engrossing story. 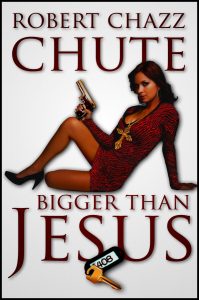 Jesus Salvador Umberto Luis Diaz works as a hitman for the mob, but he’s not a sociopath. Just a former soldier without job training for anything else. He performs his duties because he has no choice. His goal is to acquire the money his latest victim stole from the mob so he can escape to Florida with his girlfriend. The trouble is, he finds himself embroiled in an internal struggle for power—a Machiavellian game in which he is merely a pawn. Jesus’ greatest talent is the ability to talk his way out of dangerous situations. He faces quite a few of them. The more he’s forced to lie, the more urgent it becomes for him to find the money before the lies catch up with him.

A Cuban émigré who came to the United States illegally, Jesus relates his horrific childhood experiences in flashbacks that might have slowed the story if they were less adroitly done. Instead they give a deeper understanding of Jesus and his motives while telling a gripping story of their own. As with the main story line, Chute’s pacing is perfect.

The second person narration feels natural from the first page. After a while I stopped noticing. The second person is essential to Jesus’ character and the way he relates to himself. Jesus aspires to be a ninja, quicker and craftier than the other players. After setting up an elaborate ambush, only to get bushwhacked, he comments, “You aren’t a smart ninja.” In first person, the remark would be an admission of incompetence. Spoken to himself, it becomes the humorous jeer of a spectator.

Near the end, the author presents the reason why Jesus thinks in second person. It ought to be unnecessary. The reason occurred to me earlier in the story, and anyway the narrative voice works beautifully and needs no justification. But I can guess why Chute does it. Some readers might be annoyed or unsettled by the strangeness of second person, so he explains. If these readers hang in there long enough to reach the explanation, it ought to satisfy them.

With Bigger Than Jesus, Robert Chazz Chute proves that genre fiction can be inventive and unconventional in its use of language while delivering a suspenseful story. I look forward to the sequel and the further adventures of Jesus.