I love novels in a series. With each book you get to know the characters and their world a little better until they become like friends and you can hardly wait until your next visit. With the debut of Jim Giammatteo’s A Bullet for Carlos, I’ve discovered a new friend in Brooklyn cop Connie Gianelli.

Connie has a starkly divided life. A single woman with a job that leaves her no time for a social life, she lives alone with her cat Hotshot, rescued from a crack house. She frets over her loneliness and yearns to marry and raise children. The trouble is, she’s committed to being a cop, a career she chose because of her uncle, mobster Dominic Mangini. She loves him but detests what he does. Both her parents are dead; Dominic is like her father. He has impressed on her the importance of family. “La famiglia é tutto,” he tells her. Family is everything.

Her job places them both in a difficult position. Connie’s fellow cops assume she’s dirty because of her family associations. She isn’t, but her integrity is always in question. She understands that as a cop there is a line she cannot cross. But what happens if she comes up against that line? Will she do her job or remain loyal to her family? For obvious reasons, Dominic wishes she would leave the police. Since she refuses, he does what it takes to protect her.

As the story begins, Connie and two other cops are ambushed during a drug buy. They have no backup. Previous buys have been sabotaged by leaks from the department, so plans for this one are closely guarded. But the dealers know about it anyway. Connie finds herself trapped in an alley, outgunned, with two dead partners. She can either call for help or die. She knows the police won’t arrive in time, so she calls Dominic. He sends a lieutenant with men who kill the dealers and recover the cash the cops have brought to the buy. But no drugs are found. Maybe the mobsters took them—although Dominic forbade it—or maybe the dealers never brought any drugs since they planned an ambush. Anyway, suspicion falls on Connie. Questions arise about how she survived the ambush. To clear her name, she must uncover the real leak. That means investigating the Mexican cartel running the drugs. Both her superiors and Dominic order her to leave the cartel to them, but under the pretense of investigating a cold murder case, she travels to Texas, where she tracks a sadistic serial killer and faces the ruthless cartel leader who wants her dead. 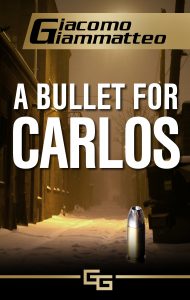 The intricate plot converges neatly without feeling contrived. Giammatteo moves skillfully between Connie’s first-person account and omniscient third-person narration. Connie’s compelling voice centers the story on her. She’s a wonderful character—sensitive, tough, and honest with herself. When she begins working with flamboyant Texas cop Tip Denton, readers might expect the conventional romance to blossom, but Giammatteo gives them something truer. A friendship based on affection and respect.

The story contains some profanity and violence. It would hardly be realistic otherwise. If you enjoy hard-edged crime fiction, A Bullet for Carlos will keep you riveted. And if you’re anything like me, you’ll be looking forward to the next Connie Gianelli novel.

For a limited time, A Bullet for Carlos is available as an ebook for only $2.99. 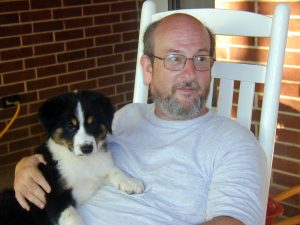 Giacomo grew up in a large Italian family in the Northeast. No one had money, so for entertainment he and his family played board games and told stories. He loved the city—the noise, the people—but it was the storytelling most of all that stuck with him.

Now Giacomo and his wife live in Texas, where they run an animal sanctuary with 41 loving “friends.” Sometimes he misses the early days, but not much. Now he enjoys the solitude and the noise of the animals.

Connect with Giacomo on his Web site.

Why Jesus talks to himself

Why Readers Give Up on Books
Scroll to top