On a rainy afternoon Joe and I took a road trip to check out the Walldog event in the nearby town of Arcola. The Walldogs are a group of sign artists who have painted murals on the sides of buildings in towns and cities  all across America. The murals are designed to chronicle people and places of significance to the particular town, so they enhance the town’s character as well as adding artistic beauty.

The painting was underway during our visit although the artists retreated indoors or under tents when the summer shower became a downpour. We braved the rain to take photos of the works in progress. (So okay, I snapped most of them from inside the car, but we did get wet. Well, damp anyway.) We plan to return once the murals are complete and photograph the completed murals. Meanwhile, here are some of the shots we got.

Some murals commemorated historical businesses like the two dedicated to Pfeifer Seed and Arcola Candy Kitchen. One honored Arcola native “Average Joe” Ernst. According to an article from WAND-TV news,

A decorated veteran, Joe is now 88 and watched work on a mural honoring his life.  In 1941, Joe was working in a local restaurant when a group of African Americans came in seeking service.  “Man’s hungry,  I don’t care what color he is, he’s hungry.”  It was in the days of segregation and black Americans could not be served in most eateries.  Joe served those customers and the next day he was fired.  “Oh yeah.  Next morning I came to work and the key wouldn’t fit the doors” Joe told WAND News.

The African American customers?  It turns out it was the “Queen of Jazz,” singer Ella Fitzgerald and her band.  Joe had no idea who his famous customer was.

The average Joe is a decent guy. So much for my dark and cynical view of the world.

Here are some other Walldog murals in various stages of completion.

The final mural celebrates Arcola Lawn Rangers, the world-famous lawnmower precision drill team. These guys have marched in hundreds of parades all over the country, including President Obama’s inaugural parade. If you want to know more about this quintessentially American group, check out this video.

But really, their motto says it all. 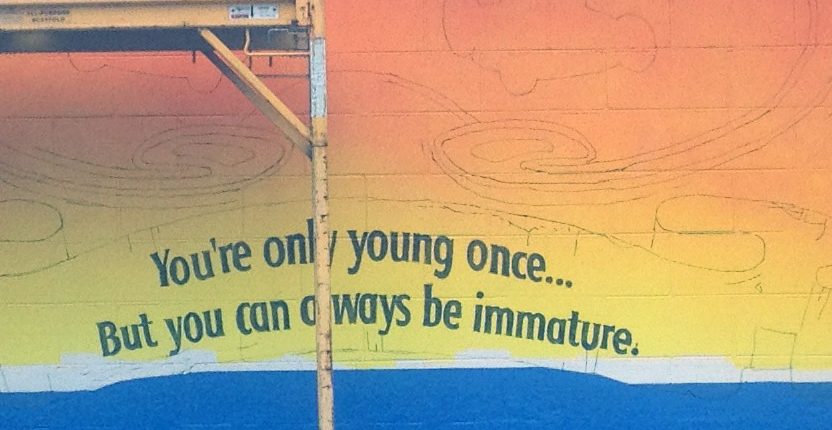 Payment: 49% of a dream
Scroll to top