A weird thing happens when I take a walk after spending several hours staring at a computer screen. The world becomes stereoscopic, the kind of artificial, exaggerated effect you get watching movies in 3-D. And as with those movies I’m slightly off keel. Not dizzy, exactly. Floaty. For the past few weeks I’ve spent most of my waking hours in front of the computer. I plowed through a line edit of my new novel Daemon Seer, knowing I had to finish by a certain date. Another task loomed — to create the interior of The Memory Pool: Reflections of Past~Forward, an anthology that Cantraip Press, Ltd is publishing this fall.

Despite being an S-corporation, Cantraip Press is just me, Mary Maddox. 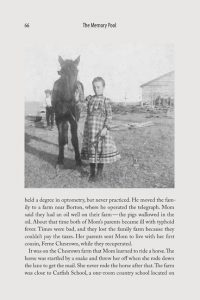 The Memory Pool contains the work of the Past~Forward Memoir Group, begun several years ago by students who had taken a course in memoir writing with Dr. Daiva Markelis. Daiva’s memoir, White Field, Black Sheep: A Lithuanian-American Life, was published two years ago by The University of Chicago Press. Passionate about memoir, she inspired her students to keep writing and learning. The group flourished and their writing became better and better. 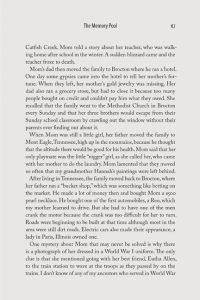 The Memory Pool is the group’s second book. The first, Occasional Writers: Bringing the Past Forward, also published by Cantraip Press, is available online and through special order from bookstores.

Creating the book’s interior took me a week of steady work. I haven’t worked with 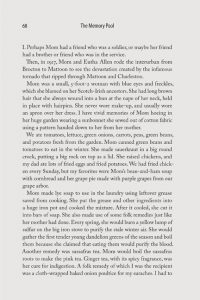 InDesign enough to know the program inside and out, which slows me down, and the process requires an attention to detail that becomes exhausting after a while. But I’m happy with the result. The anthology contains some fascinating old photographs supplied by the authors and wonderful photos and drawings by local graphic artist Gaye Harrison, who also created the cover. 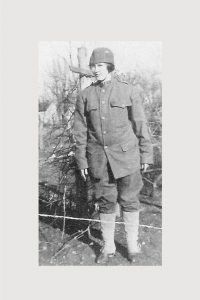 The book still needs to undergo a final round of proofreading, but I’m posting the pages of one piece, Hannah Eads’ “My Mother,” to give you a taste. (Click on the images to make them big enough to read.)

The Memory Pool is a local project. The Past~Forward group is sponsored by the Coles County Arts Council, and almost everyone involved in it lives in this area. One exception: our proofreaders, who work for The Editorial Department, a company I’ve worked with before and come to rely on and trust. 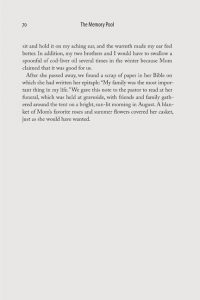 The book’s interior is finished and copies have been sent to reviewers. After a day of downtime binging on episodes of Supernatural, I’m ready for my next challenge—preparing to bring Daemon Seer to market. Hard work is, well, hard and often isolating. But for me it’s the only way to get things done.

What are you, writer or author?