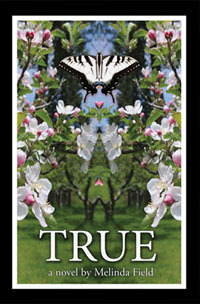 I found plenty to admire about Melinda Field’s novel True. In polished prose the author creates a world of memorable characters and a lavishly described rural Northwest American setting. She knows and loves horses. The novel’s title is taken from one character’s description of horses as “true to their ancestral memory, their environment, their instincts, and their herd.”

The same might be said of the Yee Haw Sisterhood, the band of women at the center of the story. They know where they come from. Their lives are rooted in isolated Green Valley, California. They trust one another, and all of them eventually come to trust their deepest feelings.

The story opens with teenager Cat in Phoenix, Arizona. With her mother in prison she has nowhere to go except to her grandmother in Green Valley. Cat is less than thrilled by her new home, where she feels very much an outsider. After her arrival, the point of view switches to the various members of the sisterhood as they gather for one of their regular camping trips into the mountains. All are strong women who endure loneliness, loss, or in one case an abusive marriage, without whining.

Emma, a nurse and midwife, receives more narrative attention than the others. If the novel has a single protagonist, it is Emma. After several teenage boys drug and rape Cat and her grandmother dies, Emma takes her in. The novel chronicles Emma’s struggles to help Cat survive the aftermath of the rape, to care for a dying friend, and to gather the courage to rekindle a romance with the man she loved long ago. Interspersed with these conflicts are the stories of the other women in the Yee Haw Sisterhood. By the end of the novel, I felt as though I knew these women like friends.

As much as I enjoyed True, I think many readers will find it slow going. The lush and sometime purplish description will make some impatient. And the storytelling is flawed. None of the many plot lines dominates enough to give the novel a strong dramatic core. Events don’t build to a climax. They simply unfold. The subplot involving a woman with dementia seems extraneous. It has thematic resonance but does nothing to further the action. The novel doesn’t need the extra weight.

Another subplot fizzles in a frustrating way. Just as Cat faces a serious threat, the story switches to the mother of one of the sisterhood and then to Emma’s romance. When it finally comes back to Cat, the threat is resolved in a couple of sentences of dialogue.

If you crave action and suspense, look elsewhere. But if you love stories with vivid settings and strong female characters, True delivers.