Writers are expected to write about their creative process. It’s on every handy list of blog topics for authors. But this particular topic is a struggle for me. On one level is the mystical Source From Whence All Inspiration Flows, and I haven’t got much to say about it. It’s my well in the desert. If it dries up, I’m toast.

On another level the creative process is a set of practices that, like rituals, give the writer access to the Source. But I have nothing as exalted or predictable as a ritual. I don’t need a special chair, a lucky pen, a certain place or time of day (although I usually write in the morning). And inspiration doesn’t always come to me in the same way.

I might experience a creative moment when an story comes to me in its entirety, a flash of inspiration with a strong emotional component. In that moment I experience the story and understand its meaning. The story is complete and perfect. My writing inevitably falls short of the original conception, but sometimes it comes closer than others.

A long time ago I wrote a short story about a woman who falls in love with her parakeet. From the beginning I knew the last line would be “Daniele would love Yubi as long as she lived.” I began the story with Daniele’s brother giving her the bird as an unwanted gift and simply aimed toward that last line. It felt easy. (“Yubi” is available here as a free download.)

But my fiction isn’t always conceived in a magic moment. For my horror novel Daemon Seer I set out with only a goal, to write a sequel to Talion. And Talion began as a story about the friendship of two very different teenage girls. The serial killer’s role was to unite them against a common enemy, but somewhere along the way the son of a bitch highjacked my story.

Since Daemon Seer ends with a cliffhanger, I pretty much have to write a follow-up. Fortunately the story of Daemon Blood came to me in a flash of inspiration. I’m in the middle of writing the first draft now.

Before I can write, I have to discover the story’s tone. Sometimes this means reworking a paragraph several times. This part of my process contradicts the advice of writing gurus who advise never, ever stopping to revise a first draft. But I can’t help it. No way can I continue until the prose sounds right. Once it does, I move ahead at a decent clip. And sometimes tone isn’t an issue since I have it right from the start.

I outline my novels, for all the good it does. An outline is like a rough map of uncharted territory. You begin the journey and discover there’s no path where the map clearly indicates there should be a path. Instead you spot something off to the west that might possibly be a path. So you head that way instead, trusting that it eventually leads where you need to go. No matter how elaborately I plan, I come to a place where I have to trust my sense of direction. Maybe that’s what creativity is.

Occasionally characters refuse to go along with my plans for them. In Darkroom, a bartender named Nina Ivan gets drugged and raped at her place of work. There’s a scene in which the protagonist, Kelly Durrell, persuades Nina to report the rape to the police. That’s how I planned the scene anyway. By then I was working on a later draft of the novel. In earlier versions Nina was a much less important character and I hadn’t thought much about her background or motivation. I didn’t really know who she was.

While writing the persuasion scene, I reached a point where I got stuck. I couldn’t figure out why. The dialogue wasn’t coming and dialogue is usually easy for me. I stopped in frustration. When I came back to the scene the next day, I understood. No way was Nina going the police. She isn’t that kind of character. I wrote the scene her way and altered the story. Everything worked out. 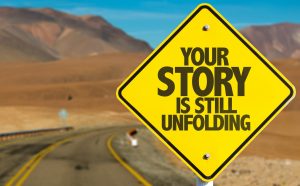 Usually. There’s always a chance of dying of thirst in the middle of the desert. Creativity takes faith.

A shiny new object changes everything – and nothing
Scroll to top