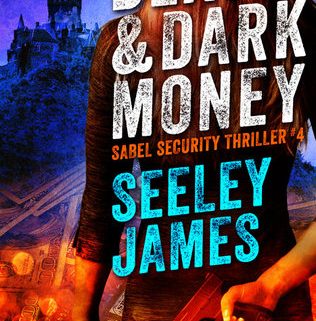 In his international conspiracy thriller Death and Dark Money—the fourth book of the Sabel Security series— Seeley James shows how loopholes in Citizens United open the door for foreign corporations and nations to influence American policy. Pia Sabel, ex-Olympic soccer player, now runs her adoptive father’s international security company. The company receives a contract from an influential firm of lobbyists that includes a mysterious twenty million dollar payment for seemingly nothing. When Pia wants to know where the money comes and what it’s buying, she becomes a target. One thread of the plot traces this money to its source.

Another thread follows the machinations of an underling to seize control of the firm of lobbyists. Spurred by his ambitious wife, a contemporary Lady Macbeth, he stops at nothing to gain control. As people begin dying, Pia and her father become caught up in the struggle for power.

James has borrowed liberally from Shakespeare’s Macbeth, the sort of literary allusion that you don’t often find in thrillers, and  handles it deftly.

I literally could not put the novel down. I planned to read for an hour or so and instead read through the afternoon and into the evening. It wasn’t only the story that kept me riveted. It was characters that I loved or detested with a passion.

Sometimes thrillers are so plot driven that the characters aren’t very complex. The nonstop action keeps them so busy that they don’t have time to reveal much depth or nuance. Death and Dark Money provides memorable characters as well as a suspenseful and intelligent storyline.

Unlike the girl with the dragon tattoo, Pia doesn’t possess abilities that verge on the superhuman. Though she has extraordinary athletic ability, it’s sometimes not enough for her to triumph and barely enough to keep her alive. Pia is haunted and driven by the mysterious murders of her parents when she was a small child. Her search for the truth runs through all the novels of the series, a mystery that has me eager to read the next one.

Much of the novel is written in third person omniscient, a common point of view for thrillers since it allows the narrative to move quickly from one location to another and from one character to another, as the plot requires. But James has also included a first-person narrator, Jacob, a possibly crazy ex-soldier who works for Pia’s security company.

Jacob’s voice adds warmth and quirkiness to the narrative. He could have been a stock character. Instead he draws me so far into his hallucinations that I begin to believe they’re real. Who’s to say he doesn’t really see and speak with the Roman god Mercury? Except for conversing with pagan gods and being occasionally obtuse about women, Jacob has a firm grip on reality.

And who knows? Maybe Mercury really does exist.

If you enjoy political intrigue, contemporary relevance, and a dash of originality in your thrillers, I highly recommend Death and Dark Money. 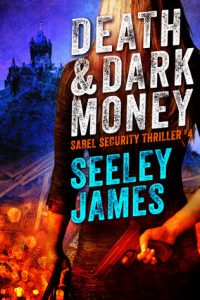 My writing process – That Magic Moment
Scroll to top