I don’t post many negative book reviews. When I’m not connecting with a book, for whatever reason, I stop reading unless I’ve committed to reviewing it. And I don’t feel comfortable judging books that I haven’t finished. I liked Mary Louise Kelly’s The Bullet and Sherry D. Ficklin’s Playing With Fire enough to finish them. Despite their differences, the two thrillers share one quality that always draws me into a story: an engaging first person narrator with a distinctive voice.

This YA novel centers on Farris Burnett, a teenage hacker whose father is a Marine Corps officer. The story begins as he assumes command of Cherry Point air base and she enrolls in a new high school. When someone hacks the base computers and begins wreaking havoc, Farris sets out to find the culprit. 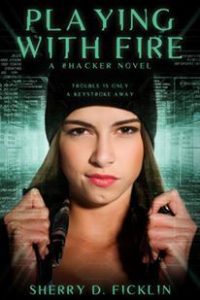 Farris has a strong voice, and the secondary characters are complex and interesting. Overall the writing is good, but the book could have used better editing. The author uses principal in a context that calls for principle, and there are a few confusing sentences.

The main problem with the novel is the plot structure. The hacking problem begins almost halfway into the story. Everything up to that point involves Farris’s life—her dead mom, her somewhat distant relationship with her father, the unfair ostracism she faced at her last high school, the challenge of making friends at the new one, the dilemma of liking two guys who hate each other. The characters introduced in the first half do play important roles in the hacking plot, but the author could have told readers what they needed to know in half the space.

The upshot is that Playing With Fire is more teen high school drama than it is thriller. This might not be a problem for the novel’s teen audience, but the book description led me to expect more suspense and less romance.

Caroline Cashion, a professor of French at Georgetown University, discovers that she’s adopted and has a bullet in her neck. The bullet has been there since she was three years old and her birth parents were shot and killed. I struggled with the premise. This woman is in her 30s and none of her doctors ever noticed the bullet lodged against her spine until it began causing symptoms? And her adoptive parents never told her anything about her origins? I was willing to give the improbability a pass because the first-person narration hooked me from the start.

Caroline flies to Atlanta to find out who her parents were and what happened to them. She learns that they were killed in their home and that the bullet passed through her mother before entering her. Removing it from an infant would have been too dangerous. The killers were never found. 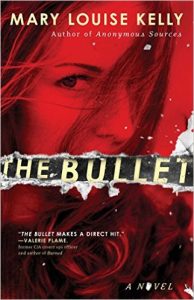 While she’s busy talking with reporters and the detective who worked the case, her doctor shows up at her hotel. He’s flown all the way from Washington because he’s smitten with her. They strike up a romance. Later she finds out he’s married, making the subplot even more irrelevant than it already was. I have nothing against romantic subplots if they somehow advance the story. This one is mostly filler. It shows an aspect of Caroline’s character, that’s about all.

A reporter in Atlanta also tries to seduce Caroline, but he’s not as attractive as the doctor. He writes a story about her, though, and soon after her return to Washington, someone breaks into her apartment with the clear intention of doing her harm. Events escalate from there.

Caroline’s later actions surprised me since they seem to contradict her character. Readers are supposed to believe that the revelations about her past have changed her profoundly, but there’s nothing about her life beforehand that makes her behavior believable. Not to mention the unlikelihood of someone intelligent and mature traveling around the country shortly after dangerous surgery.

The story is well told, but the credibility issues and pointless romance put a drag on its momentum.

A Clone in the World