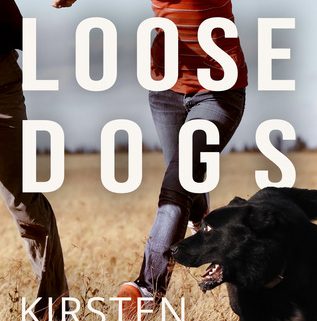 Kirsten Mortensen’s Loose Dogs is a wonderful novel, full of comedy without ignoring life’s sadness and cruelty. The characters are deftly drawn. The author gives them individuality even when they’re recognizable types. The story unfolds at a satisfying pace that kept me reading from start to finish.

Paige Newbury, the narrator and protagonist, works as an animal control officer in Rochester, New York. She seems content with her life, but then she receives a ring in the mail—not a diamond engagement ring, just gaudy costume jewelry that her erstwhile boyfriend, Gil Rudman, picked up at a flea market. Paige takes the ring as a sign that Gil, who left a while ago to pursue his career as an artist, is coming back to her.

She doesn’t want Gil to think she’s been waiting around for his return, even though she has, so she enlists the help of an acquaintance to pose as her boyfriend. Larry Crawford is a slick attorney and an accomplished player. He’s attracted to Paige and only too happy to help out with her scheme.

At this point I almost lost respect for Paige. The fake-boyfriend routine is such a stupid move, bound to end badly. And she obviously lacks the panache to bring it off. But Paige is a kind person. She sacrifices a meal at an expensive restaurant (courtesy of Larry) to catch a loose pit bull whose wounds suggest he’s been used for dogfighting. She worries about what will become of the pit. When a callous owner abandons her pregnant dog, Paige takes Lady in and sets about finding homes for the puppies. How could you not like and respect someone like that?

Many of Paige’s observations about the world and herself are laugh-out-loud funny. She thinks of romance as “the Prozac nature has slipped in our drink” to make life bearable.”  She has intelligent and wit. Even though she’s not glamorous, it’s altogether believable that Gil would come back to her and Larry would chase after her.

The plot of LOOSE DOGS turns on the romantic triangle, but I enjoyed the subplots just as much, especially Paige’s efforts to find and stop a dogfighting operation. Animal welfare is clearly an issue that matters to Mortensen. She donates some of the profits from the book to pit bull rescue.

Unlike many of the stories I enjoy, Loose Dogs has no foul language and no graphic sex or violence. Like its protagonist, it has humor, intelligence, and a good heart. 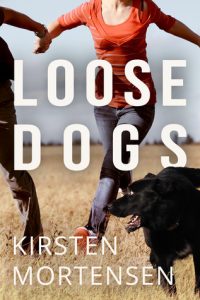