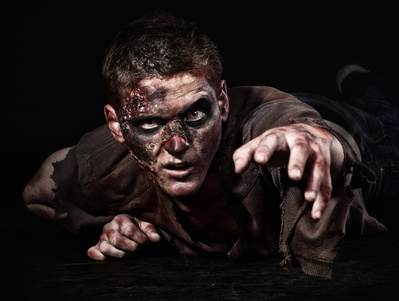 I could never get into zombies. Sad reanimated corpses, mindless and sexless, they shuffle along dropping rotted body parts in their wake, pausing occasionally to gnaw living human flesh. Horrifying, sure. Funny in a grisly kind of way. But mostly boring. Certainly not figures that evoke empathy.

I’ve enjoyed a few zombie movies—George Romero’s classic Dawn of the Dead, Peter Jackson’s slapstick Dead Alive, and Edgar Wright’s satiric Shawn of the Dead. But I wouldn’t have watched any of them without the urging of my husband, Joe, Heumann, a film scholar. (Joe takes to movies for reasons other than the stories they tell. He would watch anything by Peter Jackson because he loves Jackson’s visual style. Joe has seen The Lord of the Rings movies, parts of them more than once, but he has only a vague idea who Eomer and Faramir are.)

Given my indifference to zombies, it’s not surprising that I greeted the Zombie Apocalypse with a yawn. I had no interest in reading one of the many novels with a ZA premise. I wouldn’t have read Isaac Marion’s Warm Bodies (now also a movie) except for a recommendation from a friend whose judgment I trust. She loaned me the paperback.

Isaac Marion changed my mind about zombies. In Warm Bodies he creates a zombie hero who’s sympathetic, intelligent, and—amazingly—attractive in spite of his decomposing body.

R tells his own story and wins my sympathy from the start. He remembers nothing of his former life except the first letter of his name. He has a humdrum existence, hanging around an airport colonized by others of his kind, and venturing out to hunt and consume the few remaining humans in the novel’s post-apocalyptic world. But what else is he supposed to do? Everyone has to eat, right? R accepts that his flesh will eventually rot away until he becomes a skeleton, one of the Boneys who act as the colony’s elders.

Boneys keep zombie society functioning. They create schools to teach newbie zombies how to hunt. They join couples in a kind of parody of marriage, and they lead fervid religious services worshiping the sky. Fierce defenders of the status quo, Boneys keep everyone else in line.

The parallels between zombie and human society are humorous at the start, but they grow darker as the story unfolds and it become apparent that zombies are a manifestation rather than the root cause of the worldwide collapse of human societies. Things have gone terribly wrong, and nobody seems to know exactly how or why.

R shuffles through this structured non-life with a kind of bemused acceptance. Then something unprecedented happens. While out hunting, he consumes the brain of a young man named Perry. He experiences the usual pleasurable rush of memories and sensations from the brain, but they don’t pass within moments as they usually do. They linger, and gradually Perry takes up permanent residence in R’s mind.

R feels the need to help and protect Julie, Perry’s girlfriend, who is in immediate danger of being eaten. He conceals her from his fellow zombies and brings her home to the old airplane where he entertains her with recordings of Frank Sinatra songs.

Like a socially challenged high-school boy, R feels deeply but cannot express himself. His stuttering attempts to declare his love to Julie are touching and funny. And her gradual acceptance and growing affection for him show the best qualities of humanity—tolerance, empathy, and forgiveness.

Caring as he does for Julie, R finds he cannot go on as before. He can no longer eat people. He doesn’t know what he might become or whether he can survive the transformation, but love compels him to change. And the love between him and Julie inspires other zombies to question whether their fate is inevitable. In the end the lovers risk everything to find out.

Warm Bodies has zombies, but at heart it’s a love story. It embraces the treasured and audacious belief of romantics that love can change the world.

The Big Eddy Club: The Stocking Stranglings and Southern Justice

Be sure to catch Loose Dogs
Scroll to top