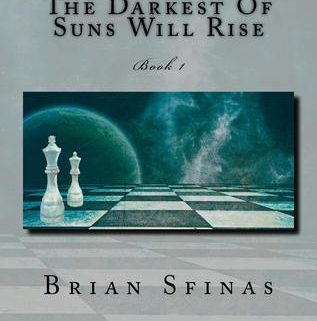 The epistolary novel (a novel written in the form of journals or letters) has a long history going back to the 17th Century. It’s uncommon these days, but Brian Sfinas has adopted it to write an imaginative and sometimes brilliant work of science fiction.

The Darkest of Suns Will Rise consists of a series of official reports and the journals and letters of principal characters. From these Sfinas constructs a terrifying and only too credible world of the future in which much of humanity lives and dies on space stations without ever setting foot on Earth. With its population at a sustainable level, the planet’s ecosystem is healthy once more. Macaws have been genetically modified to be as intelligent as humans. Nano robots clean up messes, from smudged walls to demolished space ships, by deconstructing them at the molecular level. They heal injuries and disease, doubling the human lifespan. Super intelligent and benign aliens known as the Pronogsticate monitor the governance of human beings.

A secretive group called the Orphanage range through space, plotting the overthrow of the Prognosticate and the rule of reason. The Orphans are the few remaining believers in God. The military commander Aiden DeCaro is their chief enemy. He detests their destructiveness, irrationality, and rebellion, but he harbors the same traits in himself and works to conceal them from the probing of the Prognosticate.

Aiden also keeps Clarissa, his lover, hidden in his cabin on board the ship he commands. Their relationship is sadomasocistic in the extreme. He kills a man who accidentally sees Clarissa and feels little remorse for doing so. The love affair between Aiden and Clarissa forms the emotional core of the story. His political struggles and fight against the Orphanage unfold around it.

Despite the brilliant conception and fully imagined world, the writing occasionally falls short. In a novel like this, errors in grammar or usage can be a way of creating a distinct narrative voice, but not when they contradict the character’s intellect and education, as happens two or three times with Aiden.

In the middle of the story, Aiden spends time on Earth writing in his journal. He ruminates at length about economic and political conditions in the early 21st Century. Although many of the author’s observations are astute, they seem extrinsic to the story and slow it further at a point where it’s already dragging.

Finally, there is little or no foreshadowing of the abrupt ending. I anticipated it a few pages ahead because I saw nowhere else for the story to go.

Overall, the novel’s many strengths outweigh its few weaknesses. The Darkest of Suns Will Rise is a haunting novel, remarkable for its complex characters and intelligent vision of the future. 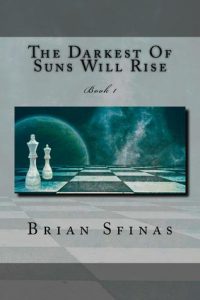 Check out The Books Machine for great reads!
Scroll to top