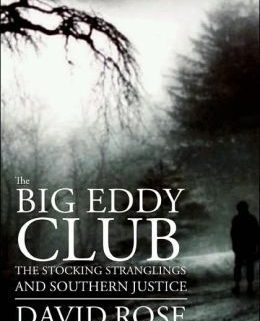 My cousin Deon doesn’t email often, so when a message from her lands in my mailbox, I open it with curiosity. Some time ago Deon wrote to recommend a book. Knowing I read about serial killers, she thought I might enjoy David Rose’s The Big Eddy Club: The Stocking Stranglings and Southern Justice. The stocking strangler was active in Columbus, Georgia, in the late 1970s. His victims were elderly, well-to-do white women, all from the same wealthy neighborhood. Deon lived in Columbus at that time and witnessed the city’s fear and outrage at the brutal crimes.

I had read very little about the crimes or Carleton Gary, the African-American man convicted of committing them. I leafed through a number of books and found brief references to Gary in Robert K. Ressler’s WHOEVER FIGHTS MONSTERS and John Douglas’s MIND HUNTER. Ressler and Douglas mention Gary only in passing. Both note that he was convicted, and both divulge a bit of the evidence against him. Neither seems interested in examining Gary’s psychology the way they examine other serial killers. For one reason or another, they appear to find him and his crimes uninteresting. Possibly I internalized this attitude; I wasn’t especially eager to read about the stocking stranglings. But I found the book on Amazon—on sale!—and decided to give it a chance.

I’m glad I did. The Big Eddy Club is an excellent piece of journalism. It is not, however, a serial killer book in the usual sense. Rose isn’t interested in analyzing the crime scenes or probing the mind of the killer. Instead he raises the question of whether Carleton Gary actually is the killer. Rose places the crimes, the hunt for the perpetrator, and the trial of the accused in the context of the place where they happened: Columbus, Georgia. He presents a history of racism in the area going back to the end of the Civil War. He gives accounts of lynching and other violence inflicted on African Americans, acts even more savage than the crimes committed by the stocking strangler, and makes the point that no white person had ever been sentenced for killing a black person in Columbus.

The Big Eddy Club of the title is a venerable private club for socially prominent folks in Columbus. Many of the strangler’s victims belonged to the club or moved in the same social circles as its members, as did the trial judge, the appeals judges, and the prosecutors involved in Gary’s trial. Rose presents it as a bastion of traditional Southern values and a symbol of institutionalized racism. Only recently the club admitted its first African-American member, one sign that things are finally beginning to change in Columbus.

Excellent as it is, The Big Eddy Club makes difficult reading—not because the subject is tedious or the book poorly written. Rose recounts so many past and present injustices against African-Americans, piled one upon another and culminating in Gary’s trial, where the prosecution withholds evidence from the defense and lies to the jury, and where the judge is blatantly biased against the defendant and makes no attempt to disguise his feelings or be fair. It was making me furious. When I reached the account of the judge’s refusing the defense any financial resources then booting them from a courthouse office for failing to pay a long-distance phone bill, I put The Big Eddy Club  aside. Not until weeks later did I pick it up again and push on to the inevitable conclusion. After years of appeals, new exculpatory evidence, and blatant evidence of the prosecution’s wrongdoing, Carlton Gary is still on death row.

If you’re shocked or baffled by the contempt expressed by many African-Americans for our system of justice, read this book.

Note: This review was published a few years ago just as I was beginning to blog and not many people were reading it. I want to spotlight the book again. It truly is worth reading.