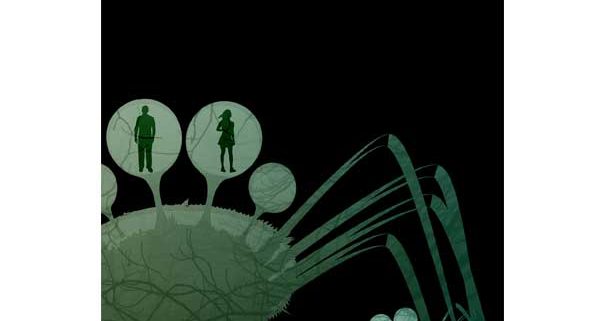 Looking for something different?

AIA Publishing has just released its fifth book, and in line with previous fiction titles, the book has a unique voice and a metaphysical bent. Spiderworld by Richard Bunning turns the tables on humans and spiders, and makes you think about humankind’s relationship with animals and with each other.

Not even the time-lord, Orlando Oversight, knows everything. But speculation can turn into a real future, and the Lush Star system, where spider-like beings treat humans as we do animals, isn’t such a distant dream away.

Do Jack Baker, the self-styled ‘Spartacus’, and his followers have a future as more than meat and slaves? Will Athalie have the life she hopes for with her hero? And will the ‘spider’ Boklung hold his business together while funding and organising the Arcraft’s voyage across the Milky Way?

Spiderworld is another of Richard Bunning’s quirky, speculative, science fictions.

Is it any good?

Of course it is. It’s published by AIA Publishing, a selective publisher with high standards in quality control. It’s also Awesome Indies Approved and has been nominated for an Awesome Indies Seal of Excellence in fiction.

This is a unique read in so many ways, and I loved it. Eight-limbed “spiders” rule the Multiverse. Humans (yeng) are an enslaved species, and also provide delicious meat to the Aranians. This was a book that pulled me into its pages. If you love sci-fi, alien worlds, even a bit of romance, then you’re bound to love this book.

Where can I buy it?

Richard is a citizen of the United Kingdom and New Zealand, but currently resides in Switzerland. He has seven substantive books published, plus one gift-market book written with few words and many short stories appearing in a number of anthologies. His novels are all speculative science fiction while his short pieces cover many genres. He’s also written ‘modern’ English language versions of French neoclassical plays that spouted from some quite different region of his author personality.

Details on all Richard’s writing, including free stories and ‘bloggins’, plus his reviews of many other writers’ works, can be found at:- http://richardbunningbooksandreviews.com

What are the daemons in Daemon Seer?
Scroll to top