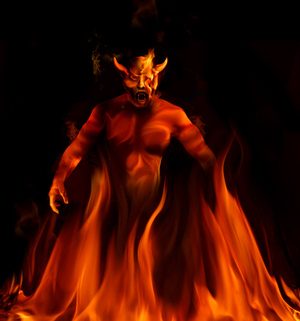 Christian psychoanalyst M. Scott Peck has participated in exorcisms and seen the devil. He saves this revelation until near the end of his book People of the Lie: Hope for Healing Human Evil. Otherwise I might have stopped reading. Folk who claim to have seen the devil lose a certain amount of credibility with me. Instead, Peck begins the book with a case history.

A teenage boy comes to see him for treatment of depression after the suicide of his older brother. The kid is apathetic and uncommunicative, but Peck eventually learns from him that his parents gave him a birthday present: the gun with which his brother killed himself. Peck calls the parents in for a session and asks them why. They become defensive. They’re poor working people. They can’t afford to buy expensive birthday presents. They’re not educated like the doctor with his fancy medical degree, so it’s easy for him to criticize ordinary people like them. Try as he might, Peck cannot get them to acknowledge the implications of their gift. He finally gives up and arranges for the kid to move in with an aunt in another city.

These parents are examples of what Peck calls evil personalities. They refuse to take responsibility for what they do. Instead, they lie—to themselves and to others—to preserve their own self regard. They shift the blame to anyone who challenges them. Peck categories such people as “malignant narcissists.” He distinguishes them from sociopaths, who have no conscience and are incapable of feeling guilt. The “people of the lie” suppress their conscience because listening to it hurts too much.

Peck sees the same psychological pattern at work in collective behaviour. He was one of the psychiatrists charged with investigating the massacre at My Lai during the Vietnamese war. Those involved in the killings maintained they did nothing wrong, yet they lied and covered up what happened. He and the other shrinks came up with an ambitious plan to study the psychology of the soldiers at My Lai, but—surprise!—the military wasn’t interested in funding it.

Now that Peck has pointed out this pattern of lying to oneself, lying to others—anything to keep from facing the nasty truth about oneself I see it everywhere. Politicians do it a dozen times a day. Herman Cain especially seems to be a master of the technique. Every time there’s a war, something like My Lai happens. But nearly everyone occasionally falls back on lying or blaming when confronted by criticism that threatens their most cherished image of themselves. I do. My fragile little ego can’t stand up to a really scathing self-examination, and I resent it when others take it upon themselves to pass judgment on me. I fall back on a time-tested defense: “That’s right, blame me,” I say bitterly. “I’m always the one who’s wrong.”

So for M. Scott Peck, an evil personality comes down to a stubborn unwillingness to look honestly at oneself, no matter what, a relentless smothering of the conscience until it’s dead at last. Peck hopes for a resurrection, but I have my doubts. Some people are just assholes.

The Sociopath Next Door

Gotta have that try
Scroll to top