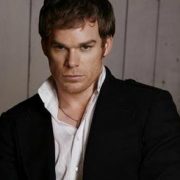 Video streaming is dangerous for me. I’m obsessive, and unlimited access to TV episodes has turned me into a binge viewer who consumes up to fourteen 40-minute episodes in a single day. It’s unhealthy and certainly unproductive. Over time patterns have emerged from my viewing choices. Disturbing patterns. I prefer stories with violence — lots and lots of violence— and heroes who are psychopathic and downright scary. Now I’m setting out to understand who these characters are and why I’m drawn to them despite the terrible things they do. I’m beginning with Dexter Morgan, protagonist of Dexter. I wrote this post a few years ago, while Dexter was still on cable (and before poor Rita gets slaughtered by the Trinity Killer), but my feelings about the lovable serial killer haven’t changed.

As one of six million plus Facebook followers of the Showtime series Dexter, I occasionally visit his page to view the photos and video teasers. Photos of Dexter (Michael C. Hall) draw effusive comments from women who think he’s “so Hottttt!!!!” and “soo sexy.” A more thoughtful fan muses that he’s “nothing special,” but nonetheless “that guy is killing me softly.” Not that I’m judging anyone here. I’ve watched every episode of Dexter at least twice. Like the women who coo over the photos, I’m besotted. Sometimes I do wonder why. Dexter is, after all, a serial killer.

The third fan is right, it’s not his looks. Though Michael C. Hall has a certain animal magnetism, he isn’t wildly handsome. The attraction is to the character he plays so well. Thanks to his foster father, a policeman, Dexter has learned to channel his murderous impulses for the good of society. He only kills murderers. “Taking out the garbage,” he calls it. His job as a blood splatter analyst for the Miami police allows him to identity the people who have gotten away with murder, and he takes care to find them guilty beyond a reasonable doubt. But he’s still a psychopath with a compulsion to cut people into little pieces. It’s really, really icky. 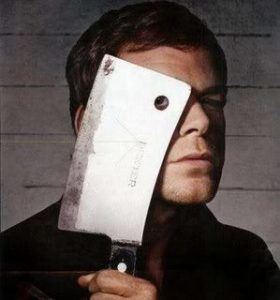 Much of the credit for Dexter’s lovability goes to the show’s writers. The stories are told from his point of view with voiceover narration, so viewers see the world from his perspective. At the beginning of the series, he presents himself as a monster incapable of connecting with other human beings. His loneliness is touching. Every season a story unfolds, and at the heart of each one is Dexter’s quest to find somebody who sees and accepts him for what he is. Things never work out. His would-be friends and lovers are either so homicidal he’s forced to kill them, or like Lumen — a woman seeking revenge on the men who raped and brutalized her — they aren’t homicidal enough.

This need to be truly seen could explain some of his ritual. He speaks to the murderers on his killing table and confronts them with their victims. He wants them conscious when he cuts their faces to make the blood slides he keeps as trophies. They must see what they’ve done. And they must see him.

Despite his expertise in killing and not getting caught, Dexter is hapless on a social level. He’s perplexed by the most ordinary situations. Since he can’t feel emotions the way others do, he has no idea what to say or how to act. Often he mimics what he observes other people doing or saying. Dexter botches his wedding proposal to Rita twice. Then he hears a stalker confess to killing the unreceptive object of her passion. “My life was an unanswered question,” she tells a detective tearfully. “He made everything real.” Dexter recycles the lines when he proposes to Rita a third time. She bursts into tears and says yes. As much as I like the character of Rita, I can’t help laughing at how easily she’s taken in.

As the series continues, Dexter slowly discovers his humanity. There are dramatic turning points. In the first season his biological brother – a psycho killer like him – demands that he kill his foster sister. “Does it have to be Deb?” he asks plaintively. “I’m – fond of her.” But of course it has to be Deb. Forced to choose, Dexter slays the newfound brother who sees and accepts him rather than the sister with whom he has grown up and who has “a blind spot” when it comes to him. 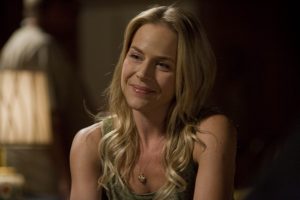 In the second season he chooses the clueless Rita over Lila, his soulmate. Over and over he thwarts the monster in himself and affirms his humanity. In the end he becomes a lovable human being with a bad habit. Messy and morally dubious, but no worse than drug addiction. It’s both apt and ironic that Dexter has to attend Narcotics Anonymous meetings because Rita thinks he’s a heroin addict. Speaking to the group, he describes the Dark Passenger that compels him without specifying what it compels him to do. The other addicts assume he’s talking about drug addiction and nod in understanding.

Poor Dexter, he can’t help himself. He was traumatized as a child. And the world is better off without the murderers he kills. I’ve had my problems with substance abuse. I get lonely too. Sometimes I have no idea how to behave around people and have to fake it, just like Dexter. We’re so much alike. And now that I really look at him, he’s so Hottttt!!

I see you, Dexter! I love you just the way you are.