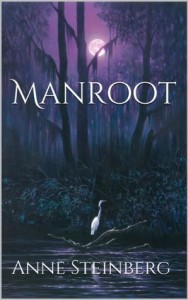 In Manroot Anne Steinberg tells the tragic story of Katherine, who inherits the gift of magic from her Native American mother and nothing but heartache from her abusive white father. After her mother’s death Katherine and her father travel from the Southwest US to a small town in Missouri, where they find work at a tourist hotel. There Katherine falls in love with a local judge who hangs out at the hotel with his cronies.

She begins collecting items connected to the judge—a cigarette butt, one of his cuff links, a few strands of his hair, and a man-shaped ginseng root (the manroot of the title)—negligible things, but she believes their magic binds him to her. For a brief time the couple is happy even though the judge refuses to leave his spoiled, childless wife. Then the magical items are discarded when Katherine’s room is repainted. Distraught, she behaves in ways that alienate her lover.

At this point in Manroot I wondered if Katherine’s belief in magic is supposed to be a delusion, since her reaction to the loss rather than the loss itself triggers the chain of events leading to her ruin and threatening her sanity. Later events show the magic is quite real. Just not altogether under her control.

I can’t give specifics without spoiling the story, but the narrative shifts away from Katherine in the second part of the novel. She stays in the background, emerging now and then to do her magic and influence events. Although these events are compelling and matter to Katherine, it’s as though her destiny is sealed and her personal story has ended. From now on she must live by proxy.

An omniscient narrator tells the story, which necessarily creates distance between the reader and the characters. Both the point of view and the narrative structure kept me from fully identifying with Katherine. In addition, the narrator comments on and reacts to events. The editorial omniscient is more common in 19th Century fiction, and it gives Manroot an old-fashioned feel. Not a bad thing in itself. Sometimes, though, Steinberg uses it to insert long expository passages that become a bit boring.

One quirk irritated me, the overuse of the exclamation point. The author attaches it to sentences that are declaratory. For instance, “That was when she sent for Katherine!” Those exclamation points were like flies. Just when I hoped I’d seen the last of them, another one buzzed me.

Overall, though, Manroot is a haunting story with lush description, complex characters, and a kind of mystery that cannot be neatly categorized or explained.

Have you written a short story that deserves to be read?

Do you love birds? Get “Yubi: A Love Story” for free!
Scroll to top